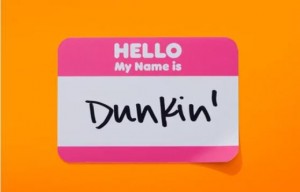 When Dunkin’ Brands announced that it was dropping the word “Donuts” from the name of its leading brand Dunkin’ Donuts, it caused quite a stir. But in reality, the decision was the result of significant testing. And while some Dunkin’ loyalists have taken issue with the name change, the company sees it as part of its long-term plan to become a “beverage-led, on-the-go brand.”

Dunkin’ like many brands before it, is choosing shorter and sweeter over legacy and originalism. Dunkin’ is riding a decade(s)-old wave of brand name simplifications that appear to be in response to similar stimuli:

For Dunkin’, beverages, not donuts, account for up to 60% of sales. And while donuts are essential, they are no longer the exclusive focus. Dunkin’ is in good company. Consider Apple, which in 2007 shortened its name from Apple Computer, to represent a product line that includes the iPhone, iPod, Mac and Apple TV, only one of which is actually a computer. Add Starbucks, which prior to 2011, was Starbucks Coffee.

My colleagues and I have for years referred to Dunkin’ Donuts as simply Dunkin’, such as in “Hey, can you get me something from Dunkin’?” This has been reinforced by the ad campaign, “America Runs On Dunkin’,” launched in 2006. Similarly, customers were referring to Kentucky Fried Chicken as KFC long before the corporation shortened its name officially in 1991.

Last year, digital ad sales surpassed linear TV ad sales, according to IPG’s MediaBrands’ Magna. And the overwhelming majority of digital ad spending is on mobile devices. Brand names must, by necessity, be well designed to appear on all platforms, and compact for smaller mobile devices.

Officially dropping “Donuts” from its name is an acknowledgement of the fast-paced world in which the Dunkin’ customer lives, works, and plays, and aligns the brand with on-the-go lifestyles. The word “Dunkin” is active and playful with an element of fun, making it memorable. The Huffington Post made a similar move when it shortened its name to the quicker, hipper, easier-to-read HUFFPOST.

So, as you consider refreshing your brand name or rebranding altogether, check yourself against the above. Do your homework, conduct research to ensure whatever change you make enhances your connection with consumers and positions you not just for today, but also for tomorrow.